On my desktop computer at work I have both speakers and headphones. When I'm wearing the headphones I want the speakers to be muted. Like most computers, when you plug the headphones in the front, it mutes the line-out on the back, but unfortunately my desktop is under the desk and it'd be impractical to reach under and mute it.

Since I switch between wearing them and not wearing them quite frequently, I wanted something that would automatically mute the speakers when I put the headphones on. As a bonus, I'd like my music to pause or unpause automatically. (I share an office, so leaving the music playing all the time won't work.)

Instead of creating a keyboard shortcut to mute or unmute the speakers, I got a little carried away. I have a webcam, so I thought that I could attach a QR code on the top of the headphones. Then, looking at myself in the webcam, I realized that the color of the headphones might be enough.

Perhaps it'd be possible to analyze the webcam image and determine whether or not I was wearing them by counting green pixels.

I tried grabbing a frame from the webcam with mplayer, but it turned out that the image was too dark until the camera had a chance to adjust itself. It's just as easy to read video frames. 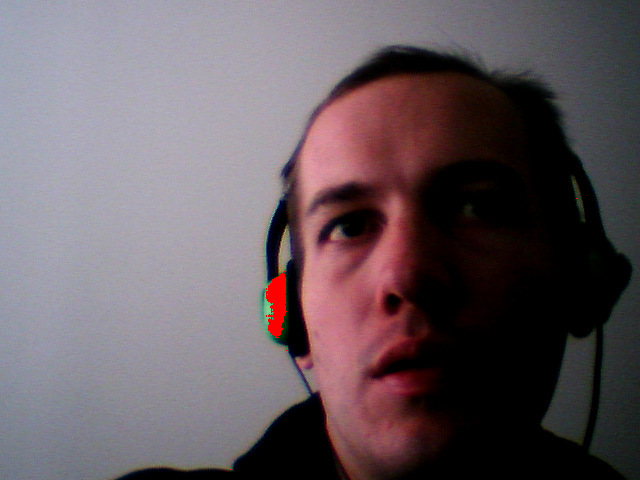 It turns out that it works perfectly. In the example above, 938 pixels match. When I'm not wearing the headphones, less than a dozen match!

To be safe, I've added in some extra logic to reduce the amount of switches, which adds a slight delay. After using it for a few weeks I'll have the values tuned to better values.

Of course, sampling nearly a million pixels every second is not something that ruby best suited for (it takes 137ms/frame on an i7). Luckily, it's easy to replace just that portion with C code using the RubyInline gem.

And the C code:

Full code is available on github.